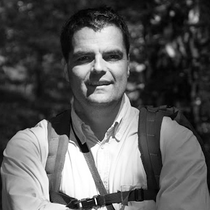 Thomas Stach is the leader of the Electron Microscopy working group at the Department of Biology of the Humboldt-Universität zu Berlin. He previously held a Heisenberg Scholarship and served as Interim Professor of Systematics and Animal Evolution at the Freie Universität Berlin. He studied Biology in Heidelberg and Tübingen, and received his PhD from Tübingen in 1999 with a thesis on the development of Branchiostoma, supervised by Professor W. Maier. He worked for several years as a postdoc in the United States and Sweden before joining the Freie Universität Berlin and receiving his habilitation in 2008. He is interested in the developmental biology of tunicates and hemichordates in relation to the early evolution of chordates. His current projects deal with the comparative study of cell lines and the evolution of eye structures in planktonic deuterostomes.