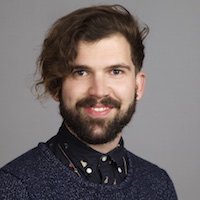 In 2010 Jared Cocke obtained his Bachelor of the Arts degree in Chemical and Biomolecular Engineering from Rice University in Houston, Texas. He spent a year abroad in Berlin during his program, later returning to obtain a Master’s degree in Energy and Process Engineering from the Technische Universität Berlin. He began his doctoral studies in Regine Hengge’s laboratory at the Humboldt University Berlin.

For his doctoral dissertation he is investigating the composition of supra cellular architecture and the morphogenesis of bacterial biofilms from a morphological and historical-analytical standpoint. Additionally, part of his project studies the production and analysis of images representing these macro-colonies, in particular Ferdinand Cohn’s research and the general history of microbiology since the 19th century.