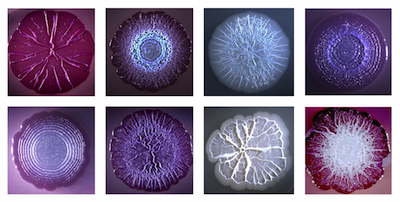 The Architecture and Morphogenesis of Biofilms

Taking bacterial biofilms as its model system, the central question examined by the project is how genes, in interaction with environmental conditions, shape space, that is, the supracellular architecture and morphogenesis of these microbial communities, which behave like tissues. Biological »construction materials« (extracellular amyloid fibres and cellulose), whose cellular production is genetically controlled depending on the position of the cells in the biofilm, create a complex supracellular architecture and determine physical parameters such as cohesion and elasticity. These physical characteristics enable the biofilm to assume a three-dimensional form in diverse patterns visible to the naked eye. These kinds of spatial shifts lead to a change in the environmental conditions for large parts of the biofilm, which in turn has a genome-wide effect on gene expression in the affected cells, resulting in secondary morphogenetic processes.

The project’s research work spans the entire spectrum from molecules to visible morphology. Whereas microbiological research has for a long time focused on processes in individual bacterial cells, for the first time bacterial communities formed of millions of cells are used as an ideal model system to research fundamental macroscopic/morphogenetic processes. In addition to furthering the understanding of the underlying molecular signal transduction pathways and regulatory networks, this also raises questions as to how to handle complex images of morphological form – at both the microscopic level and the visible macroscopic level – as the phenotype in molecular genetic investigations. We will also examine what role bacterial multicellular associations have played in the history of microbiology since they were first described by Ferdinand Cohn in 1877 in a highly eloquent but unillustrated account.

The project’s strategy is to integrate experimental, historical-analytical and creative approaches. One of our primary objectives is to further the understanding of the molecular regulatory processes upon which the construction of the supracellular architecture and the morphogenesis of bacterial biofilms are based. The principles of molecular biology will be combined with approaches from morphological research and visual studies. Given that images represent the primary data or aggregate models and that they can have a function in science communication, their production and analysis will be subject to ongoing critical examination.

The model systems used are macrocolony biofilms of Escherichia coli, a human gastrointestinal bacteria that appears in harmless and pathogenic varieties. Our investigations will focus in particular on the role of the signal molecule c-di-GMP in the formation of the supracellular architecture and biofilm morphogenesis (see also: http://www.biologie.hu-berlin.de/de/gruppenseiten/mikrobiologie/hengge/r...).

2. Complex morphological images as primary data and the phenotype in genetic investigations:

These kinds of images of biofilms cannot be reduced to numbers or formulas and hence objectivised, as is typically the case in the quantitative molecular biosciences. However, previous studies indicate that they can be deconstructed into recognisable and describable basic elements, whose presence in certain spatial patterns and quantitative ratios enables conclusions to be drawn as to the fundamental cellular and molecular components and processes in certain regions of the biofilms. We will therefore apply this form of visual analysis as the phenotypical basis for an advanced molecular genetics study of morphological form.

3. Historical-analytical project on the morphology of microbial communities:

Taking as our point of departure Ferdinand Cohn’s description of the isolation of the bacteria Bacillus subtilis in 1877 (in which he de facto provided the first description of a biofilm as well), we will critically appraise the reception history of the phenomenon described by Cohn. This appraisal will also consider the question of whether the theoretical principles of morphological research – which was a leading field of biological research until the 1930s/1940s, but was then overtaken by molecular biology – can be utilised in current research on the molecular causes of biofilm morphogenesis.

4. Science and research communication at the intersection of science and art:

We are planning book and exhibition projects, which will introduce the public to the world of bacteria and our microbiota. An artist-in-residence project in the Hengge Laboratory is also planned. In addition, the Science&Theatre project, a highly successful collaboration with the English Theatre Berlin | International Performing Arts Center launched in 2010, will continue (http://www.biologie.hu-berlin.de/de/gruppenseiten/mikrobiologie/hengge/s...).

The project’s work will be documented in (interdisciplinary) academic publications and presented to the public through the science and research communication projects described above.