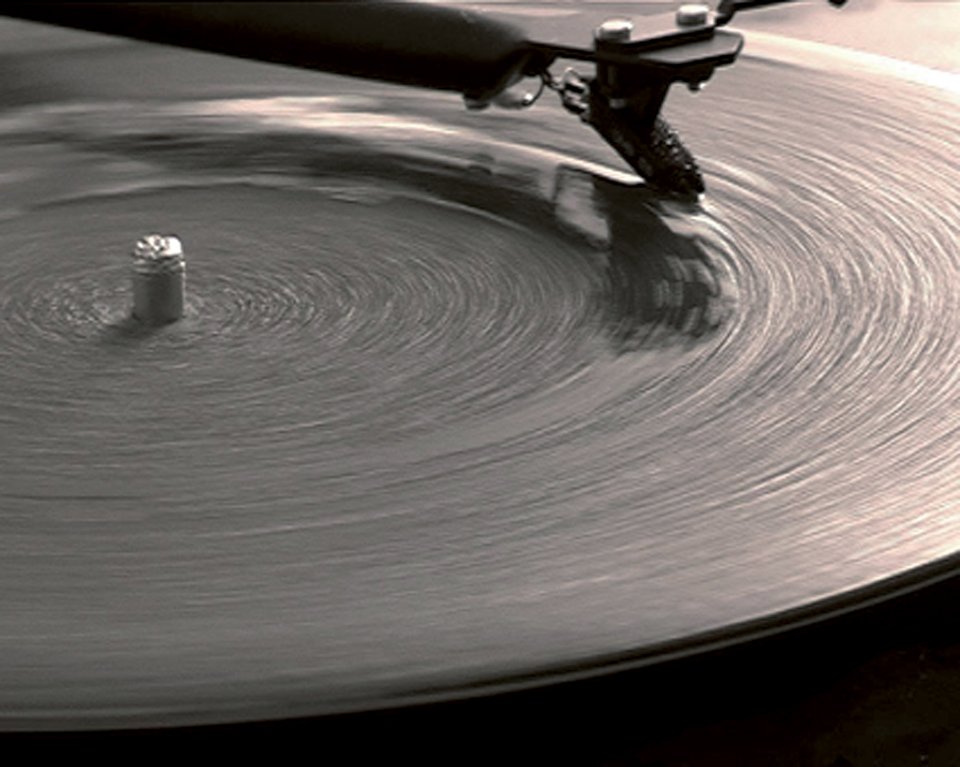 In cooperation with Humboldt Innovation.

It goes without saying that we cannot question the digital paradigm in sound storage, nor do we seek to counteract it. Using the example of the audio record, the project will explore potential approaches to future memory technologies by subjecting analog processes to experimental scrutiny using state-of-the-art technology and knowledge.

The design of surfaces or interfaces allows for the storage of large amounts of information. Initially analog, but now digital, the surfaces of disks and cylinders function as writing spaces. In rotating form, such as hard disks, Digital Versatile Discs, or audio records, they serve to store information as densely and with access as rapid as possible. Right now we appear to be in a paradigm shift: media such as flash EEPROMs or racetrack memory eliminate moving components or are based on linear movement.

Our strategic point of departure is the storage of sound, with which we will focus the wide range of knowledge from the participating researchers – competence in the history of science and technological and experimental expertise – on a single object. Since the 1990s, sound has been stored almost exclusively as digitally encoded data on disks. The debates over the advantages and disadvantages of digital storage, transmission, and processing of data are widely familiar and exhaustive. It would seem, then, that the “digital revolution” in music has, after a century of analog storage, arrived at its logical conclusion: the computer. The presence of a resilient minority of hi-fi enthusiasts – disc records are no more than 1% of overall music sales in Germany – may corroborate the hypothesis that no medium ever goes truly extinct, but it hardly mounts a serious challenge to the digital paradigm.

A closer look at the history of analog sound storage technology reveals that there has been no significant innovation in the field since the invention of variable pitch groove spacing (patented in 1949) by the German inventor and editor-in-chief of the magazine Hörzu, Eduard Rhein. Then as now, the analog data stream is mechanically cut into a lacquer disk; the surface of matrices based on this disk is subsequently pressed into a polyvinylchloride disk. The consumer’s device scans the record in purely mechanical fashion and the physics of this chain of operations decisively creates the resulting sound. Attempts since the early 1990s to create a non-contact technology, such as by scanning conventional long-playing records using lasers, have proven extraordinarily uneconomical.

It goes without saying that we cannot question the digital paradigm in sound storage, nor do we seek to counteract it. Using the example of the audio record, the project will instead explore potential approaches to future memory technologies by subjecting analog processes to experimental scrutiny using state-of-the-art technology and knowledge. Exemplary questions to be investigated include the following: Are there alternatives to recording along a spiral shaped line? How and to what extent can we minimize the size of the record groove? Which storage media may serve as alternative surfaces for mechanical scanning? Which forms of mechanical scanning, such as scanning probe microscopy, are conceivable?

In other words, the project aims to generate knowledge at the disciplinary interface between cultural studies and the natural sciences, by historicizing and experimentalizing analog data storage; this knowledge may bear fruit in the development of future storage technologies. We will build cutting-edge experimental devices, as well as evaluate the possibility of analog-digital hybrid strategies.

We will begin with an analysis of the individual historic components used to record and store sound. These include the rotation of cylinders or disks as the fundamental operation, the graphic surfaces of the storage space, the spiral used for dense and rapid recording, and the complementary relationship between recording and scanning. First we will create a complete survey of these elements and analyze them for their material, technological, and epistemic configurations. In the second phase, we will experimentally explore the different historic stages and test the implementation of the results in actual devices.

Our experts in Gestaltung will examine whether the created experimental devices can be developed into »analog storage« units that have practical relevance in everyday applications. We will collaborate with Humboldt Innovation to explore potential product developments and, if feasible, set up suitable affiliated corporate entities.